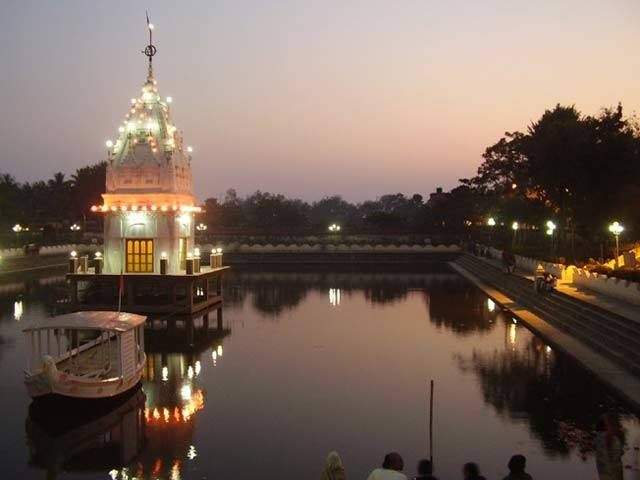 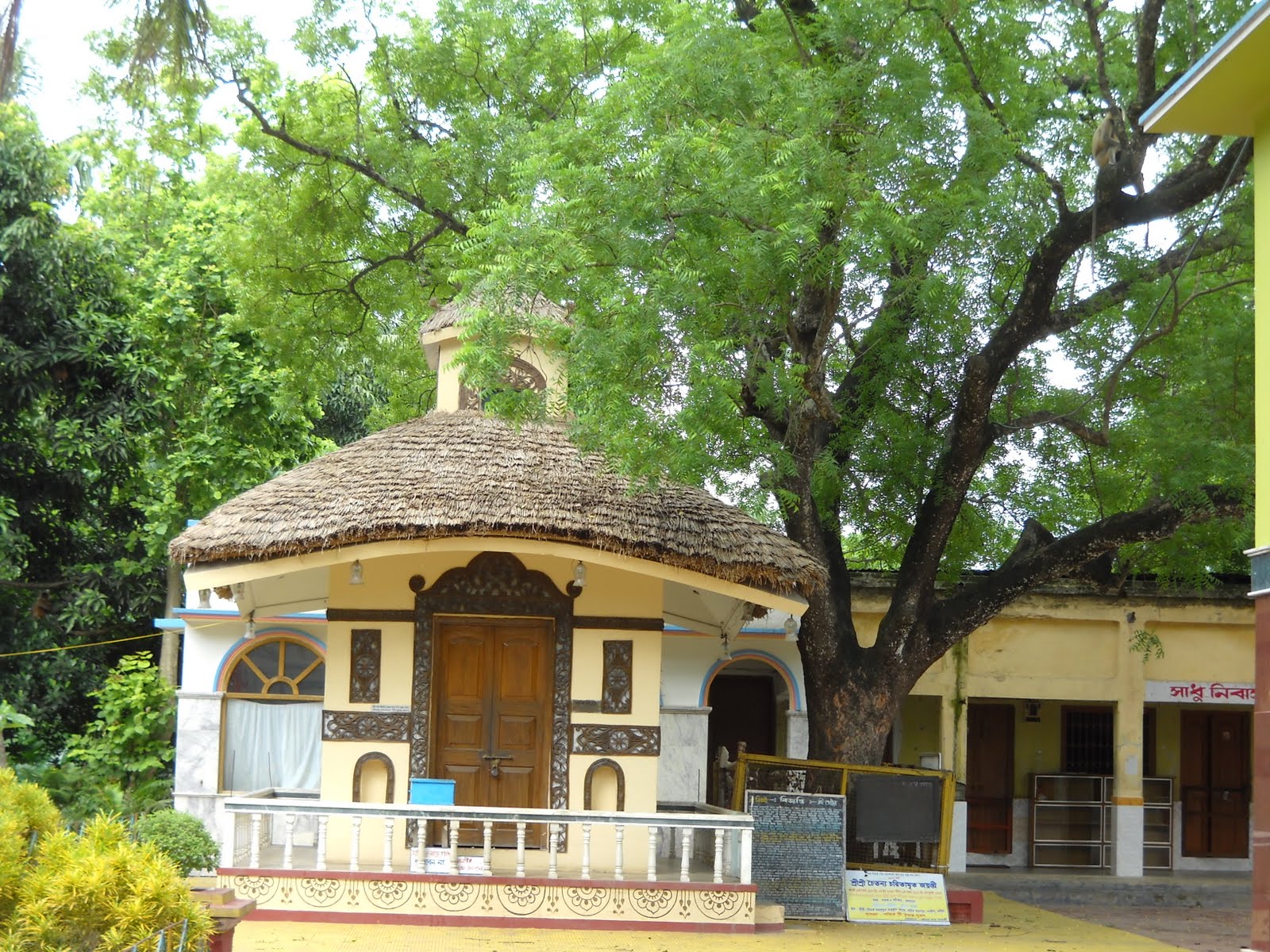 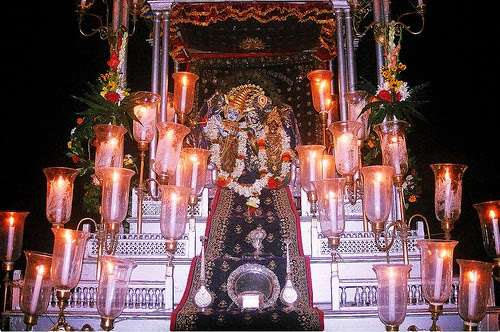 Nabadwip is a city and a municipality in Nadia district in the Indian state of West Bengal. It is a holy place where Chaitanya Mahaprabhu was born. Located on the western bank of the Hooghly River, it is considered to have been founded in 1063 CE, and served as the old capital of the Sena dynasty. A center of learning and philosophy in medieval India, the city is still noted for its traditional Sanskrit schools.[2] The Navya Nyaya school of logic reached its peak with the efforts of some well known contemporary philosophers of Nabadwip. The great Vaishnava saint, social reformer and an important figure of the Bhakti movement, Chaitanya Mahaprabhu (1486–1533) was born here, for whose sake, this place has turned into an important center of pilgrimage for the Vaishnavs worldwide as well as the Hindus in general. Many devotees who adhere to the Gaudiya Vaishnavism come to Nabadwip for pilgrimage on the auspicious occasion of the Birthday celebration of Shri Mahaprabhu on the Phalguni Purnima (i.e. on the Full moon day of the March every year), and for various festivals in relation to Leelas of Shri Mahaprabhu like Sri Nabadwip-mandala Parikrama and other festivities like Dol yatra, Ras purnima, Gaura-purnima.[3]
The Bhagirathi river originally flowed down the west of Nabadwip in the past, forming a natural boundary between the districts of Purba Bardhaman and Nadia. With time it has shifted its course to where it is at present, cutting the city off from the rest of the Nadia district.
The name of the city is derived from the conjugation of the Bengali words /naba/ (new) and /dwipa/ (island) meaning New-island. In the down stream of the river Ganges, the alluvial deposits carried over during its course that starts at the Himalayas, were gradually deposited, forming a new island which is present day's Nabadwip. The name Nabadwip and Nadia has the same connotation of the same geographical location flanked at west and north by the Ganges at earlier times.[4] Kabi Karnapur used Nabadwip as Nabīna dbīpaṁ (Bengali: নবীন দ্বীপং), mean New Island in his book Chaitanya Charitamritam[5][6]
The claim that the name Nabadwip refers to an area comprising nine islets has no ground. There are many historical references in this respect. Actually the misconception around the nomenclature of the name "Nabadwip" arose since the publication of the book "Bhakti Ratnakar" of Narahari Chakraborty. Narahari Chakraborty's claim, however, is not supportable from the perspective of geographical definition of the term Island. He might have made-up the idea of "nine islands" since "naba" in Bengali also means 'nine'. Hence "Nabadwip" i.e. nine islands, namely Antardwip, Simantadwip, Rudradwip, Madhyadwip, Godrumdwip, Ritudwip, Jahnudwip, Modadrumdwip, and Koladwip. However again, it is to mention that all these islands are loosely scattered over a vast geographical area that the Historians do not approve of the idea as being "Nabadwip".[7]
In the 2011 census, Nabadwip Urban Agglomeration had a population of 175,474, out of which 90,810 were males and 84,664 were females. The 0–6 years population was 8,388. In education section, total literates in Nabadwip city are 102,793 of which 55,569 are males while 47,224 are females. Average literacy rate of Nabadwip city is 87.75 percent of which male and female literacy was 91.14 and 84.07 percent. Total children (0-6) in Nabadwip city are 8,388 as per figure from Census India report on 2011. There were 4,329 boys while 4,059 are girls. The child forms 6.68% of total population of Nabadwip City.[1][18]       As of 2001 India census,[19] Nabadwip had a population of 115,036. Males constitute 51% of the population and females 49%. Nabadwip has an average literacy rate of 75%, higher than the national average of 59.5%: male literacy is 80%, and female literacy is 70%. In Nabadwip, 9% of the population is under 6 years of age.
Religion
Religion in Nabadwip (2011)[20] Hinduism (98.97%), Islam (0.79%), Christianity (0.04%), Sikhism (0.01%), Hinduism is majority religion in Nabadwip city with 98.97% followers. Islam is second most popular religion in city of Nabadwip with approximately 0.79% following it. In Nabadwip city, Christianity is followed by 0.04%, Jainism by 0.00%, Sikhism by 0.01% and Buddhism by 0.00%. Around 0.01% stated Other Religion, approximately 0.18% stated No Particular Religion.
Police station
Nabadwip police station has jurisdiction over Nabadwip municipality and Nabadwip CD Block.[21][22] The total area covered by the police station is 102.94 km2 and the population covered is 260,843 (2001 census).[23]
Education
&nbspThere are a total of 18 high and higher secondary schools in Nabadwip, Notables among them are Nabadwip Bakultala High School (1875), Nabadwip Hindu School (1873), Nabadwip Siksha Mandir (H.S), R.C.B Saraswatmandir, Jatiya Vidyalaya, Tarasundari Girls High School, Nabadwip Bakultala Girls High School, Nabadwip Balika Vidyalaya, Sudarshan High School and Techno India School etc. There is a college namely Nabadwip Vidyasagar College (in the name of the Great Social Reformer and the Father of Bengali Prose) affiliated under University of Kalyani.